OTTAWA — Public Safety Minister Bill Blair says First Nations policing must be made an essential service — something Indigenous leaders have been pressing the federal government to do.
Jun 23, 2020 7:46 PM By: Canadian Press 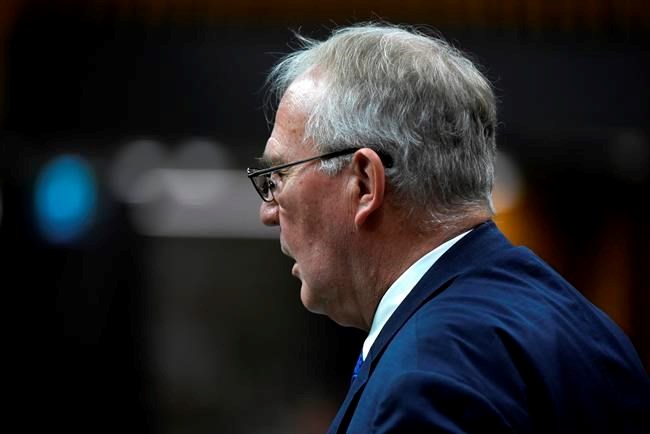 OTTAWA — Public Safety Minister Bill Blair says First Nations policing must be made an essential service — something Indigenous leaders have been pressing the federal government to do.

The government will work with Indigenous communities to come up with a legislative framework that ensures First Nations have the policing services they need and deserve, Blair told the House of Commons public safety committee Tuesday.

"It has never been acknowledged or recognized as an essential service," said Blair, a former Toronto police chief, as the committee began a study of systemic racism in policing.

Blair said he has begun contacting Indigenous leaders across the country to figure out how to best transform policing in their communities.

"We need to include Indigenous leadership in that discussion."

Concerns about police brutality and discrimination have sparked rallies and cries for change around the world since the killing of George Floyd, a Black man, by Minnesota police.

In Canada, there have been outcries over the recent police killings of Chantel Moore and Rodney Levi in New Brunswick and the battering of Athabasca Chipewyan First Nation Chief Allan Adam by RCMP in Alberta.

The report by the Council of Canadian Academies said these communities are stuck with a colonial policing model that overlooks Indigenous cultural traditions and fails to create the necessary bonds of trust.

It found the federal First Nations Policing Program has been a source of frustration for many Indigenous communities, partly due to inadequate funding.

Perry Bellegarde, grand chief of the Assembly of First Nations, recently said the federal government should immediately declare First Nations policing an essential service, rather than just a program, to ensure proper resources and a legislative base.

Blair said funding is important, but he stressed the need for a legislative framework for Indigenous law enforcement.

"In my experience good policing requires good governance," he told the committee.

Blair also said the federal government would support the adoption of body-worn cameras for officers across the RCMP in a bid to increase transparency of police actions.

RCMP Commissioner Brenda Lucki said earlier this month she was struggling with the notion of systemic racism in the national police force, only to acknowledge its existence days later.

Lucki told the committee Tuesday the last couple of weeks have strengthened the RCMP's resolve.

"We are not a perfect organization but we will continue to learn, grow and evolve," Lucki said.

"I have been listening and the calls for action have been heard."

Lucki talked about the many efforts underway to try to make the national police force more diverse and to better meet the needs of various communities.

She said the RCMP is working with the federal privacy commissioner to see how it can collect and use race-based statistics to address disparities, something forces have often shied away from due to concerns such data might be misused.

A national group representing Indigenous women is urging the RCMP to quickly take steps — including equipping Mounties with body cameras — to end what it calls needless killing and assaults by police.

In a letter to Lucki, made public Tuesday, the Native Women's Association of Canada also calls on the force to make non-violent apprehension the imperative when a suspect has no gun and to ensure social workers, health professionals or elders be called when an Indigenous person is suffering a mental health crisis.

Association president Lorraine Whitman invites the commissioner to take "the first steps to end the needless deaths and assaults of Indigenous women and men at the hands of Canadian police."

"We, as Indigenous women, did not need to read the recent spate of tragic news to understand the tragic outcomes that can occur when our people have encounters with law enforcement in this country," Whitman writes.

"But we ask that you use this moment to begin taking the steps necessary to prevent further lives from being lost."

This report by The Canadian Press was first published June 23, 2020.